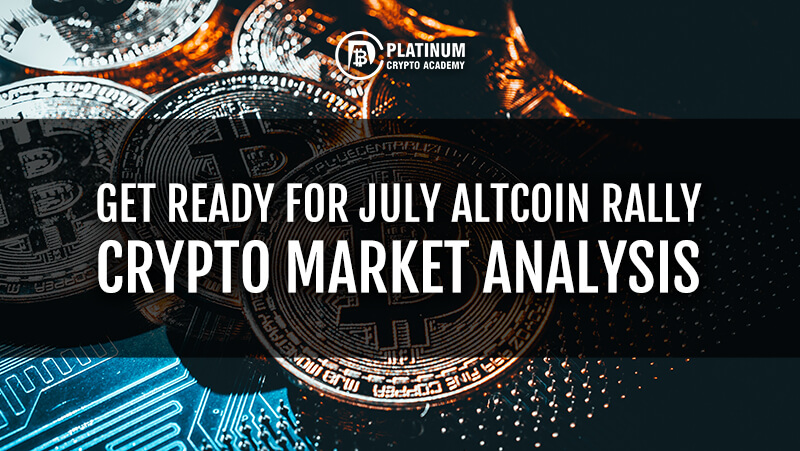 Bitcoin forecast and market analysis on July 14, 2020, it is clear that a breakout is imminent however a lack of directional indication is also causing traders a problem. Traders flock to the asset class which is backed by momentum. Currently, Nasdaq is at all-time highs and gold is close to hitting a new high. Therefore, money has been flowing into technology stocks that have sent their valuations spiking.

However, while Bitcoin has been trading in a range, the altcoins have been flying. At its intraday high on July 13, Chainlink had risen over 350% in this year alone. Veteran trader Peter Brandt recently said that the altseason has arrived and “most alts should gain on Bitcoin in near future.”

Rich Dad Poor Dad author Robert Kiyosaki said in a radio show that investments in gold and real estate would take a back seat to cryptocurrencies in the future. However, Bitcoin bull Michael Novogratz said that he owns more gold than Bitcoin. Though he expects Bitcoin to outperform gold, he believes that gold is a safer option due to the high volatility in Bitcoin.

Cryptocurrency exchange Coinbase Inc is exploring options of listing on the stock markets. If that happens, it will increase the visibility of cryptocurrencies to the traditional investors, which could attract further investment into the sector.

HOW TO TRADE – BITCOIN FORECAST

The volatility in Bitcoin continues to drop, which has resulted in very small intraday ranges. This suggests that both the bulls and the bears are sitting on the sidelines, waiting for a trending move to start.

While a breakout of the $8,100-$10,079 range will confirm a new directional trend, the start is likely to be signalled well before that.

Usually, after a volatility squeeze, as seen in the biggest cryptocurrency currently, the price expands either to the upside or downside with force on large volumes. Such a move will be the first sign that a new trend is about to start.

It is difficult to predict the direction of the breakout because the chart is projecting a balance between supply and demand as both moving averages are flat and the RSI is close to the midpoint.

A point to note is that, sometimes, the first breakout from a tight range turns out to be a fake-out. The breakout happens but then it quickly reverses direction and starts running in the opposite direction. Therefore, traders should wait for the breakout to sustain and then buy.

Another thing is that the breakout might not give deep pullbacks. Therefore, the purchases might have to be done while the price is on the move.

If the breakout happens to the upside, chances are that the bulls will push the price above the $10,000-$10,500 resistance zone. Therefore, traders should be ready to buy if a large range breakout bar from the current levels on volumes sustains.

HOW TO TRADE ETHEREUM

Ether has held above the moving averages for the past few days, which is a positive sign. However, the failure to bounce off this support signals a lack of urgency among the bulls to buy at these levels.

If the bears sink the price below the moving averages, the ETH to USD pair can drop to the support of the $217.52-$251.46 range. A bounce off the support could be a buying opportunity.

Conversely, if the pair bounces off the moving averages and climbs above the range, it will signal the resumption of the uptrend. Above $251.46, the rally can extend to the $280-$290 resistance zone.

When the price breaks out of the range, it should not re-enter and sustain inside the range as such a move will signal a bull trap. Therefore, traders can buy on a breakout and close (UTC time) above $251.46 with a suitable stop-loss.

HOW TO TRADE XRP

XRP surged on July 8 and broke out of the downtrend line of the descending triangle, which invalidated the bearish setup. However, the bulls could not keep up the momentum and sustain the price above the immediate overhead resistance at $0.20524.

This suggests selling at higher levels. On July 13, the bulls again attempted to push the price above $0.20524 but failed. This suggests that the bears are aggressively defending the resistance.

HOW TO TRADE BITCOIN CASH

The bulls could not propel Bitcoin Cash above the overhead resistance at $246, which suggests a lack of demand at higher levels. The failure to scale above the immediate resistance resulted in a pullback to the 20-day EMA.

Although the bulls defended the 20-day EMA for a few days, they could not push the BCH to USD pair higher, which suggested a lack of urgency to buy at these levels.

On July 13, the price slipped below the 20-day EMA, which is a negative sign. The bulls will now attempt to defend the support at $220.

If the price rebounds off this support, the pair is likely to extend its stay inside the tight $220-$246 zone for a few more days. Conversely, if the bears sink the price below $220, the decline can extend to $200.

HOW TO TRADE BITCOIN SV

Bitcoin SV could not follow up on the sharp rally on July 6, which suggests that the bears are defending the $200 level aggressively. The pullback has been finding support at the 20-day EMA, but the BSV to USD pair has failed to rebound off it.

The first of strength will be a break above $200 and the momentum is likely to pick up above $227. The aggressive traders can buy at $200 with a close stop-loss.