The crypto markets had a roller coaster ride last week as the price plunged to a low of £33,705.58 on April 25 but came roaring back on April 26 with a near 10% rally. Several factors played their part in dampening the sentiment last week.

During Bitcoin’s rally to the new all-time high of £47,240.05, traders had become complacent and had used excess leverage as seen from the record crypto futures liquidation on April 18. Additionally, the short-term traders who may have purchased in the run-up to the Coinbase Nasdaq listing may have booked profits.

OUR BLOG ARTICLES FOR THIS SPECIAL ISSUE ARE
HOW JUNCA SUPPORTS INTERNATIONAL MONEY TRANSFER FOR OFWS IN
THE PHILIPPINES?
A TOP PRIVACY COIN – STEALTH THE FASTEST PRIVATE DIGITAL CURRENCY
&
HOW IS DEFIBIDS A ROBUST SOLUTION FOR AUCTIONING CRYPTOS AND DEFI?

Bitcoin behaved the way we had projected in the previous analysis. Traders who had bought on the breakout and trailed their stops higher according to our suggestion could have exited at a small profit. The biggest cryptocurrency broke out of the overhead resistance at £44,238 and made a new all-time high at £47,240.05 on April 14.

However, the bulls could not sustain the price above £44,238 and the BTC/GBP pair dipped back below this level on April 17. This resulted in sharp selling by short-term traders and the price plunged below the 50-day SMA on April 18. Although the bulls purchased the initial dip, they have not been able to continue the recovery. The 50-day SMA, which had been acting as a major support, is now acting as a resistance.

Selling continued on April 19 and the pair commenced its journey toward the next support at £36,777. This is an important support to watch out for because if it cracks, the selling could intensify and the pair may drop to £31,005.

The 20-day EMA has turned down and the RSI has slipped into the negative zone, indicating advantage to the bears. However, if the bulls purchase the drop to £36,777, the pair could remain range-bound for a few days. The break above the 20-day EMA will be the first sign that the selling could be over and the bulls are back in command.

Bitcoin price GBP behaved the way we had projected in the previous analysis. Traders who had bought on the breakout and trailed their stops higher according to our suggestion could have exited at a small profit. The biggest cryptocurrency broke out of the overhead resistance at £44,238 and made a new all-time high at £47,240.05 on April 14. Read more

We had projected a target of £1,872 for Ether and it rallied to £1,850 on April 16. Traders who had bought and sold on our recommendation made huge profits within a short time, both entering and exiting at the right time. Technical traders seem to have booked profits after Ether reached its target objective. Although aggressive bulls seem to have purchased the dip on April 18, they could not sustain the price above the 20-day EMA. Read more

We recommended XRP price GBP traders to book profits at £1.12 in our previous analysis as we anticipated a correction or consolidation. Although XRP rose to a high of £1.43191 on April 14, the bulls could not sustain the higher levels. Profit-booking started a correction from April 15 and the GBP XRP pair plunged to the 20-day EMA on April 18. Traders defended the 20-day EMA but have not been able to sustain the prices at higher levels. Read more

The Cardano price GBP will face stiff resistance at £1.07197 and that is what happened. Although the price pierced the overhead resistance, the bulls could not sustain the breakout. This could have trapped the aggressive bulls who closed their positions and this long liquidation resulted in a sharp correction on April 18. Traders purchased the dip on April 18 but they could not sustain the price above the 20-day EMA on April 19. Read more

The BNB price GBP trade levels were bang on target as well. Last week, we had told traders to not get greedy and book profits on 80% of the positions when the price was about £420. The price only continued lower from there and has reached the 20-day EMA. The BNB/GBP pair attempted to bounce off the 20-day EMA on April 19 but the long wick on the day’s candlestick shows traders sold on rallies. This suggests the sentiment has turned negative. . Read more

“Dogecoin Day 4/20” and a SpaceX rocket launch are two events fuelling DOGE/USD as year-todate gains pass 7,500%. Bitcoin (BTC) may be flagging, but one cryptocurrency could not be less fazed by the market downturn, hitting new all-time highs.Dogecoin (DOGE), the altcoin based on a Shiba Inu meme, passed $0.40 for the first time on April 19, capping weekly gains of 400%. Read more

TIME Magazine continues its foray into the crypto space by letting readers pay for subscriptions with digital assets—and receive some back. TIME Magazine now allows its readers to pay for digital subscriptions with cryptocurrencies. The service was launched in partnership with digital assets exchange Crypto.com. TIME, a major American news magazine and website, will allow Read more

The booming cryptocurrency industry is forcing national banks to look towards fiat-backed digital currencies as a way of regaining back control of the financial system. Even as the outcry for central bank digital currencies (CBDCs) is becoming more and more pronounced, many world governments are gradually launching their own independent programs to meet this growing need.

High ranking officials of the People’s Bank of China (PBOC) have hinted that the apex bank is looking for ways to regulate bitcoin (BTC) as an investment vehicle, as they have major roles to play in the future, according to a Weixin report on April 18, 2021.

Coinbase’s Wednesday listing a “big milestone” for the industry whose valuation dwarfs Google’s at the time of its IPO and the current market cap of Nasdaq and ICE, which runs the NYSE. Bitcoin is nearing its all-time high as the market gets extremely excited about the upcoming listing of the largest US cryptocurrency exchange on Wednesday. Read more

Junca Group Company, a beauty and finance market leader. The Junca Cash Token is a unit price exchange in the Junca Cash blockchain software. The token is solely used for Junca Group members and fans to join the Junca Cash platform. Junca Group, besides standing out in the beauty industry, also provides crypto and fintech services to enable payment and exchanges via ATMs, wallet services, and other cards at low fees.

As crypto enthusiasts, the company seeks to boost the Asian economy through blockchain financial solutions such as international money transfer, crypto-asset exchange, foreign currency, and on/ offline payment. 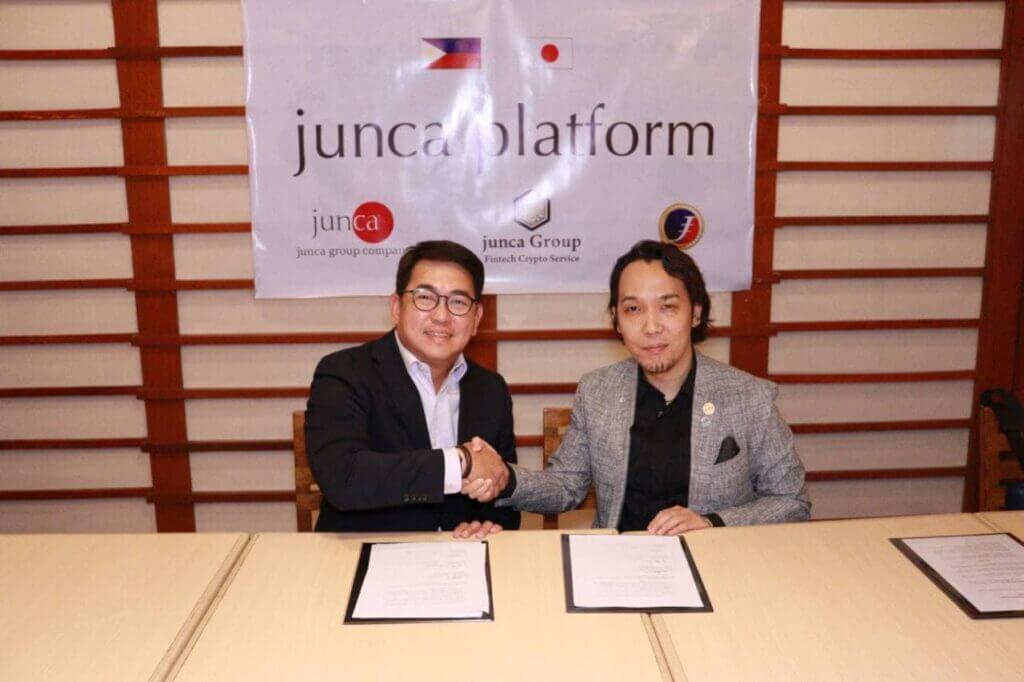 Crypto start-up organization Atani announced on Tuesday that the company raised $6.25M in seed funding. Leading European VC funds also participated in the seed round, successfully led by investor JME Ventures. Other companies who participated in the round were Encomenda Smart Capital, Lanai Partners, and Conexo Ventures, aside from individual investors, such as crypto experts, serial entrepreneurs, legal affairs, blockchain technology, crypto taxation, and finance experts.

The start-up plans to use the funds to expand its business globally, in addition to introducing premium features, such as API trading, for professional developers and traders.

The term DeFi is a single term used to describe a collection of applications created in the public blockchain to change the financial industry (Traditional Finance). Endorsed by decentralized ledger technology (blockchain), DeFi is known as financial applications built on the decentralized ledger technologies using a group of codes known as smart contracts. read more

Today’s article is going to detail how the BitcoinVend App and its respective ecosystem could just be the answer to the question of how to achieve mass adoption. Despite growing awareness surrounding Bitcoin & Cryptocurrency, they have yet to be incorporated into our everyday lives. The following statement may seem strange at such times but the fact of the matter remains that unless Cryptocurrencies are embraced into our lives and economy, growth will be relatively slow. Read more 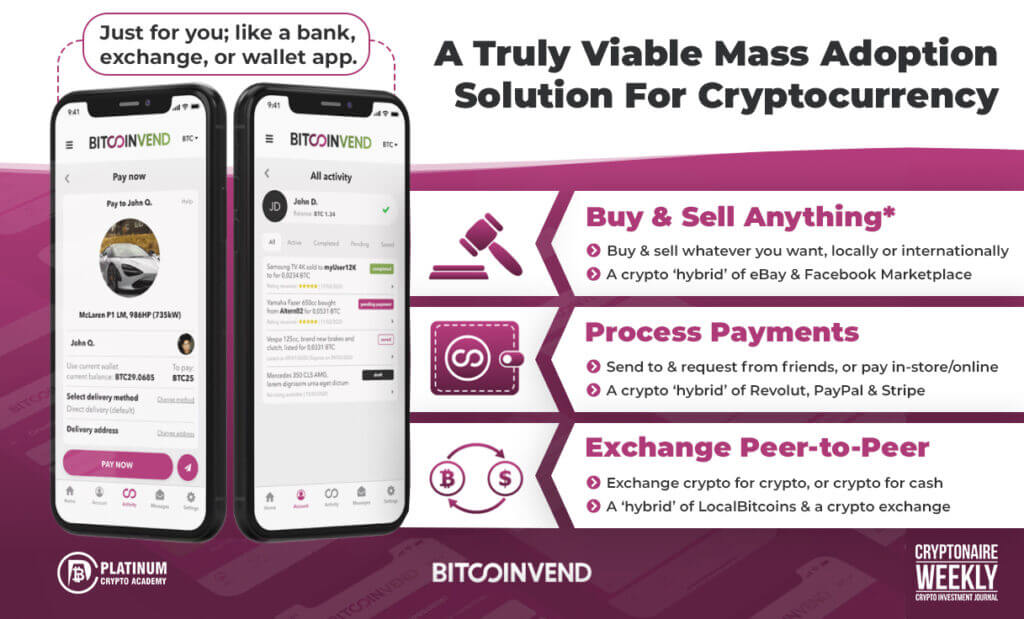 Cryptocurrency investing & Defi Auctions have been made possible in the crypto sphere allowing investors to purchase cryptocurrencies based on the ETH at more affordable rates. DefiBids, a unique crypto auction platform, gives every individual the opportunity to bid on cryptocurrencies and Defi. This concept is relatively new in the market, and it is taking a positive effect on the crypto industry.  Crypto enthusiasts now have the opportunity to better invest in the industry even with a tight budget because the lowest bid accounts for the winning price during an auction. Read more

A COMPREHENSIVE GUIDE TO THE QOINIQ CRYPTOCURRENCY TRADING PLATFORM

Today’s article focuses on the QoinSuit cryptocurrency trading platform and the major impact this can have for crypto traders.

Cryptos have been created for carrying out P2P transactions without involving any central bank or government.

There are several cryptos with different design objectives. These goals are designed to provide an alternative to cash (Bitcoin Cash, Monero, and Bitcoin), to support P2P trading through the creation of tokens, for securely accessing a service or good in P2P trading, as well as support the protocol or underlying platform. Read more