Aibook: Where Famous Book Quotes Get Immortalized On The Blockchain 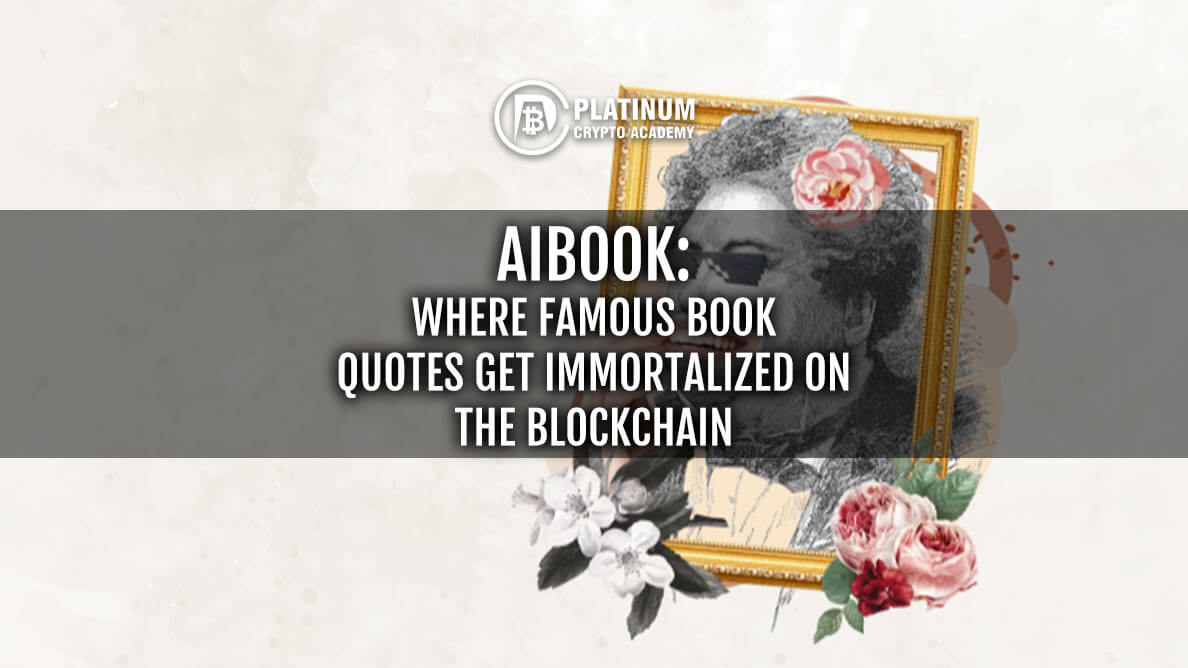 Aibook: Where Famous Book Quotes Get Immortalized On The Blockchain

How to mint AiBook NFT?

If you are a book reader or a lover of classic literature, then you must be fascinated by some of the quotes that authors of those books have used in some of their masterpieces and wished they could be better preserved in other forms as well, apart from your mind, of course.

After all, those quotes have transcended geographical boundaries, lived through generations and have eventually become timeless classics over the years. Even though the world is moving at lightning speed thanks to the rapid advancements in technology, these quotes and the personalities who have written them, will always remain valuable to literary enthusiasts.

Now, imagine being able to preserve some of those quotes permanently and, in the process, potentially attract new lovers of those timeless masterpieces too. Well, this is no longer a pipedream. New technology such as blockchain technology is making those pipedreams come true and is helping turn those famous quotes into unique digital collectible items or NFT.

This innovative work is being done by AiBook, which is a decentralized platform that provides users with an opportunity to generate NFT images with quotes from some of the most famous writers of all time. One of the key goals of the AiBook project is to foster again the rapidly diminishing habit of book-reading and also breathe a new life into the masterpieces of world literature, which are timeless classics, anyway.

AiBook is a NFT project, built on the Ethereum blockchain network, that brings classic literature to the world of Web 3.0 in a way it has never been done before. It is an innovative project that allows users to generate quotes from some of the world’s most iconic authors and get those quotes stored on the blockchain network forever.

The project has included some of the world’s greatest authors of all time such as Charles Dickens, Jane Austen, Mark Twain, Oscar Wilde, Alexander Duma, Lewis Carroll and Jules Verne. These authors have changed the course of literature globally and the AiBook team is convinced that the works of these personalities will always remain valuable.

Collectors and readers can now be able to bring these timeless treasures to the blockchain and, thanks to AiBook, people in the world of Web 3.0 can also be able to enjoy the works of some of the world’s most prolific and widely-read writers. Users get to pick between three quotes from a classic literature author of their choice. When they choose their favorite author, the Aibook platform will show up three of their book quotes for picking. Once they pick a quote, an algorithm will generate a visual NFT based on that phrase.

In terms of design, the NFT feature each author’s portrait on colorful backgrounds and the digital collectibles have collage-style traits ranging from objects to animals and symbols. Each NFT is the collage that was randomly generated from the list of elements. The debut NFT collection will launch on September 1, 2022 on the AiBook website, with only 7,000 NFT available at US $50 apiece.

Aibook has prepared 700 quotes and users can choose one of the three quotes that are predefined for exact generation and each quote has been linked to the exact author and exact book. Around 10% of the NFT will have the same quotes under it but the images are different. The most correct images and quotes composition can be set as super rare, because image sense equals to the quote.

Moreover, each month will be dedicated to one particular author and will be represented by their most popular works. The information about each writer is displayed on the website of the AiBook project. In addition, the AiBook project’s team can keep the users informed about the next authors via email, if the users subscribe to their email updates.

The author of the month is the limited collection of 70 unique NFT per author that’s designed to be premium. They are not related to the 7,000 NFT that are generated. Instead, it is the secondary activity with great bonuses, which will be announced later.

Meanwhile, each of the NFT has unlimited slots for the metadata, so that it can be re-used later to fill it up with the additional data and values, like Ai Stories, AR graphics, books and other real bonuses. Having picked some of the most widely-read writers, AiBook aspires to create a significant collection of NFT based on their quotes.

Holders of AiBook NFT will be able to generate short stories based on their unique NFT. That process too will be based on artificial intelligence. It can be generated from the quotes that users hold inside of their own AiBook NFTs. In 2023, the AiBook team plans to publish a book of short stories of the NFT holders with AR animation and the book will be distributed among the community members.

In fact, some of the main features of the AiBook project are NFT and short stories generation with the help of artificial intelligence, use of augmented reality (AR) to create images for publishing a book of short stories and printing of books and their delivery to the owners of the NFT.

How to mint AiBook NFT?

All the NFT will be generated on the AiBook website, which is quite user-friendly and easy to navigate. Each NFT is the collage that was randomly generated from the list of elements and there will be 50 elements per group. There is no pre-mints and all the minting processes are designed to be on the fly and the user can receive his/her NFT after the generation process.

There are basically three steps involved in the minting process. In the first step, users need to sign up and connect their crypto wallet to make NFT generation possible. The price for a mint is shown on the website itself.

Once the user’s crypto wallet is connected, they need to click the “Generate” button and 3 random quotes from the author of their choice will be generated for the users, via artificial intelligence.

The users then need to choose the one they wish to have an NFT image with and finally proceed with the payment to the get the NFT. As soon as the price is confirmed and the purchase is made, an NFT image with the quote will be minted and added to the user’s crypto wallet.

The AiBook NFT project will be launched on September 01, 2022, which is also considered to be the day of knowledge. There will be a pre-sale of a limited number of 700 NFT on one of the launchpads and the whitelist for the purpose will be launched soon. Interested people and users are encouraged to follow the social media accounts of the AiBook project for more information and updates on the same.

The AiBook team has already collected quotes, created collage elements and developed the platform. However, they claim the progress so far is just the beginning of their journey through the metaverse.

In the third quarter of 2022, the project’s founders will host an NFT giveaway and AI-powered lottery and users will be able to generate short stories based on their unique NFT by the end of this calendar year. Thereafter, in 2023, the AiBook team will publish a book of short stories of the NFT holders.

The printed books will be sent to the NFT owners who have a minimum of 7 authors and at least one stories generated. Other future activities of the AiBook project include the book shop from its white-label printing company as well as merchandise such as bags and notebooks with AiBook branding.

There are also plans to launch NFT Caffe where holders of 10 or more AiBook NFT can receive free coffee and desserts.

From the various plans to the AiBook project elucidated above, it is clear that the project aims to foster an interest in reading books and breathe new life into the masterpieces of world literature. By picking some of the most prolific and widely-read writers for its project, AiBook looks to create a significant collection of NFT based on the quotes of those writers.

AiBook is mainly designed for book lovers and for those who appreciate modern art alongside innovative technology and wish to keep up with the time. It seems to be a promising platform with its unique concept and a team of experienced specialists, who work hard for the benefit of customers. The team behind the AiBook project has been forked from the group’s own software development company and has experience in handling difficult projects.

Not only does the AiBook project offer users the ability to turn quotes into unique NFT, but it also has other long-term plans that include organizing NFT giveaways, sales and lotteries for those who are interested in the project and want to seize an opportunity of becoming a part of it. Therefore, it is going to be an interesting journey overall into the world of NFT and classic literature.