BITFI HARDWARE WALLET THE NO1 DEVICE FOR CRYPTO SECURITY 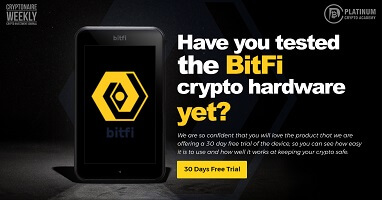 BITFI HARDWARE WALLET THE NO1 DEVICE FOR CRYPTO SECURITY

Bitfi is the most secure blockchain hardware storage system ever created. Three years down the line an the website has created a vast ecosystem. The Bitfi ecosystem secures billions in USD value without ever storing any sensitive data. Users can find the wallet online at Bitfi.com.

WHICH IS THE SAFEST BITCOIN WALLET THAT I CAN USE

Bitfi, revolutionary technology was first launched in 2018, when the first version was released. A year later, in March, Bitfi founders released the second version  Bitfi Knox or Bitfi 2.0, and in December 2019, Bitfi announced it would start shipping its DMA-3 firmware.

WHY THE BITFI CRYPTO HARDWARE WALLET IS DIFFERENT

For new users, Bitfi does not take the form of your traditional wallets. However, it has a Smartphone-like shape. When you purchase the hardware, it comes with the BitFi wallet itself, a USB charger, a case, a quick start guide, and, of course, a warranty card.
On its website, Bitfi is keen to note that it is not a wallet but rather “a private key generator.”

Crypto wallet secures your assets even when it’s stolen, smashed, or lost

One thing to note is that Bitfi became popular among users because it, unlike other storage devices, gives users control over their funds despite instances like theft, loss, seizure, or accident. For example, if, for any reason, you no longer have access to the device, all you need is to buy a new Bitfi device, which will give you back control of the funds.

KEEP YOUR CRYPTO 100% SAFE FROM HACKS AND SEIZURES

There have been a few disputes about the wallet following its “unhackable” claims. Despite the controversy, Bitfi continues to occupy a unique niche in the crypto hardware space. It is reportedly similar to the second factor in two-factor authentication (2FA) setup and functions more like a Google Authenticator.

Jared Tate  Founder, DigiByte  had this to say about Bitfi:
“From modified USB sticks to servers in deep underground bunkers, permanently storing a private key is a short-sighted approach to handling large amounts of crypto long term. Bitfi has a better, much more simple, and cost-effective approach. Bitfi is a true game-changer. It’s a paradigm shift in how we should build blockchain wallets & manage private keys.”

This unique wallet has many features. Some commonly found with other wallets while others that set it apart from other wallets. As a storage system, Bitfi is all about maximizing security for its users. Each feature was integrated to help users avoid all possible breaches and ultimately securing their funds. Here are some of its top features that are not common with cold wallets or other cryptocurrency wallets.

Unlike with a traditional cold storage system, Bitfi is WiFi-enabled. It is compatible with any device that can access the WiFi. Users can manage their Bitfi account using a Smartphone, tablet, computer, or whatever else you want to use. Bitfi explains that using WiFi in place of wired connection reduces the possibility of exposure to malware.

CRYPTO WALLET WITH NO PRIVATE KEYS

Another notable feature is the lack of private keys. Yes, Bitfi is reportedly the only wallet across the globe that does not have private keys. This feature makes it impossible for anyone to seize, lose, or steal funds from users’ accounts. Instead of storing private keys, Bitfi lets you store private keys on the blockchain. In traditional wallets, hackers and third parties gain access to users’ accounts either by stealing, duping users into giving them the keys, or hacking. Users have reportedly lost millions to unwanted parties. To secure their users’ funds, Bitfi eliminates private keys.

In addition, Bitfi has Automatic Updates. As a user, you do not need to update your devices manually to keep them up to date. The Bitfi automatically hashes all bytes to perform ECDSA checks to ensure they match with the update package. This also ensures that it has not tampered. By directly connecting the device to the WiF connection, the device will automatically start on its updates.
Bitfil helps users increase security to its platform by eliminating the need for backups. Generally, wallets have a twelve-word phrase or a twenty four-word phrase that is used as a backup to accounts. This, at times, has proven a disadvantage when third parties get access to the phrase and use it to gain access to the wallets.

Notably, unlike cold wallets devices, which are all identical units, each Bitfi device is different from the next. Each Bitfi device has a unique package in the firmware. This means that every Bitfi device is technically separate from every other device. This feature is handy since it is “nearly impossible” to counterfeit Bitfi devices.
Bitfi has its native interface, and it does not really on any third-party tools to operate. There are no folders, no third parties or Chrome extensions.
Bitfi features a locked bootloader rendering code injection futile either via a data port or via physical access to circuit board claims. Reportedly, Bitfil stand s as the only consumer device with a locked bootloader.  Unlike other Android devices, you cannot unlock the bootloader to gain root access to the device.
Importantly Bitfi provides tech support seven days a week throughout the year. A user can get in touch with the tech team through phone, directly through the Bitfi device, or via email.
Lastly, Bitfi has a unique shape that resembles a 3.9 touch screen Android tablet. In addition to not looking like a wallet, the device is not created using any special metals.

Bitfi works differently from your traditional crypto wallets. Every time a user moves their assets, there are required to enter their salt phrase, a minimal of six-digit and secret phrase, which has a minimum of thirty characters.
Bitfi then calculates your private key for any token on demand. The private key exists for a very short period that it cannot be detected. Once done, the device erases that private key. As mentioned earlier, the private keys are never permanently stored on the Bitfi.