HOW TO MAKE MONEY WITH CRYPTOCURRENCY – A BEGINNERS GUIDE 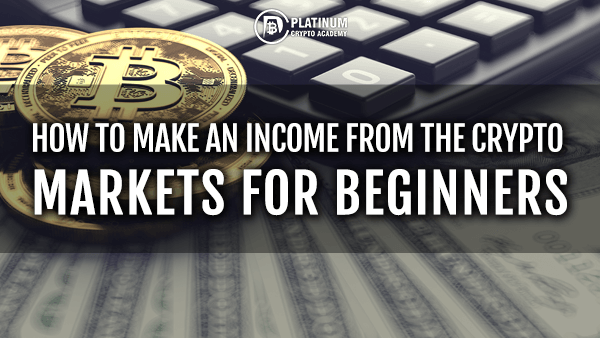 HOW TO MAKE MONEY WITH CRYPTOCURRENCY – A BEGINNERS GUIDE

Cryptocurrencies are digital assets that are created by the use of advanced encryption tech known as cryptography. An anonymous person referred to as Satoshi Nakamoto created the first cryptocurrency, Bitcoin, in 2009. The technology that Bitcoin operates under is known as blockchain technology, and it was later used to create all the other digital coins: commonly known as Altcoins.

Blockchain technology has revolutionized the financial world with the introduction of digital coins. People are gradually forfeiting the traditional financial institution and are starting to invest in cryptocurrency. The Crypto market has provided a lucrative platform for making money with cryptocurrency, and the best part is that you can always learn more about it.

LEARN HOW TO TRADE CRYPTOCURRENCIES WITH A CRYPTO TRADER!

MINING – HOW TO MAKE MONEY WITH CRYPTOCURRENCY

Mining is the process of validating transactions in the blockchain by using algorithms. The miners get to earn a coin(s) for any successful validation. This is the only way cryptocurrencies are made and one way of earning from cryptocurrencies. The good news is that anyone can be a miner so long as you have the required machinery and the basic skills.

As much as mining may be done individually, most people prefer to do it in pools. That cuts down on the mining costs and makes it easier to solve equations. With crypto mining, there are expensive machines and hardware that one needs to buy. It might be tough for an individual to handle such costs. However, if you decided to work in a mining pool, you will share the cost and make more profit than when working alone.

There is also another affordable type of mining known as cloud mining. With cloud mining, you will only require a computer for communication since you will be using shared processing power tapped from a remote data center. You will save on electricity, buying equipment and the many costs that come with maintaining the equipment. Big organizations can earn passive income by employing miners to work at their firms. The miners can also be assured of a salary dependent on how much the mining process has generated.

The market cap of the coin influences the rate at which blocks are processed. By this we mean, the closer you are to the market cap, the harder it is to mine. Luckily, even though it may be very demanding, the rewards are worth it. For example, as of July 9, Bitcoin mining hit the highest at 9.06 trillion at block height 584, 640. When it comes to Bitcoin mining, the difficulty automatically adjusts after every 2,016 blocks. On the other hand, the reward you get on mining Ethereum depends on the mining pool and the hash rate. Therefore, the returns you get are influenced by your initial investment.

STAKING – HOW TO MAKE MONEY WITH CRYPTOCURRENCY

In simple terms, staking is whereby you earn interest by holding a number of coins for a certain period or in the long-term. The interest rate will vary from one investor to another depending on the number of coins one owns. In technical terms, staking comes from proof of stake where a miner who is holding some coins determines how blocks are released in the blockchain. By keeping these coins, one gets to earn minted coins. Each cryptocurrency has a minimum staking amount and the length of time, which one can hold coins.

There are two types of staking. That is staking using master nodes and non-node staking. Master nodes are instances of participants in the network validate transactions. Most of the time, there will be minimum requirements before you can do staking. The returns usually are in the form of rewards for validating transactions. Non-node participant, on the other hand, are not required to validate transactions. That is why they do not have a minimum requirement in terms of invested amount and holding period.

Certain coins are best known for staking such as Neo, Dash, Tron, and OkCash, etc.

Neo: This is one of the most staked cryptocurrencies. The theory behind NEO is using blockchain to make sure that there is a smart economy. It ensures staking by use of the dBFT algorithm. All users need to do is to hold coins in a NEON wallet, and they can earn interest for the staked coins

Dash: Also known as digital cash, it is a common staking currency. Dash made itself to stand out by introducing PrivateSend and InstantSend features. Unlike Neo, with DASH, you can stake through a master node. The minimum requirement for staking is 1000 units, which translates to $320, 000.

OkCash: It is best known for being convenient for small transactions. Its ROI is among the highest at 10% p.a., which is a good value for money. Its current value is $0.121, and it has no minimum staking value.

Tron: Unlike many currencies that use the proof of stake, Tron uses the Delegated proof of stake (DPoS) whereby members of the community reach a consensus through a voting system. It is considered as one of the most efficient and reward proof of stake systems since there are reduced costs and low consumption of power.

TRADING & HODLING – HOW TO MAKE MONEY WITH CRYPTOCURRENCY

Hodling (HODL) is holding on a cryptocurrency for a long time. Many investors prefer hodling as compared to trading as they claim it has better returns. There are, however, those who make more money from trading as compared to hodling. It all depends on timing, your strategy, and your goals.

Whether you decide to buy a cryptocurrency for trading or HODL, one rule of thumb still applies: buy when the price is low then sell at a higher price. That means that you will make a profit at the end of the day. Watch out for bear market trends to know when you are supposed to sell your coins. Many will suggest that investors invest in Bitcoin due to its stability and significant growth.

BRAVE BROWSER – HOW TO MAKE MONEY WITH CRYPTOCURRENCY

Using apps like Brave browser is a unique source of income from crypto markets. Applications will reward you for using their platforms. An example of that is the brave browser, which is an open-source browser that is private, secure, and fast. They have a reward system that will reward an individual for installing the application and viewing ads through the browser.

INVESTING – HOW TO MAKE MONEY WITH CRYPTOCURRENCY

Another way to make money from cryptocurrencies is through ICO, IEO, and STO

ICO, Initial Coin Offering is a crowdfunding mechanism that companies use to sell the shares of their companies in the form of their crypto tokens in exchange of other currencies. Most companies use it as a scheme to raise money for a project. ICOs are like IPOs, and thus the initial coin offering usually is at an offer or discounted rate. The advantage is that you can get many tokens at a cheaper rate, which will later appreciate and thus help you to earn a profit.

The downside of ICOs is that you have to research into the company because some companies use it as a pump and dump scheme. You may find that the project does not even exist. Some of the cryptocurrencies they offer cannot be used or exchanged on other platforms. Another downside of ICOs is that they do not have the governance of regulatory bodies; hence, it is a high-risk investment.

STO stands for Security Token Offering. It is in a way similar to ICO only that when you invest in a company, you are given a security token, which stands for an investment contract of the company. The token acts as a security that you own part of the information of the product and all that is recorded in the blockchain.

Unlike the ICO, STO is asset-backed and has to comply with the set rules. This is an advantage to investors as it is more secure. It also has a higher barrier to entry as compared to ICOs since there is a lot of compliance to be done. STOs offer a lower risk, as there are more transparency and accountability. More so, since real-world assets back up STOs, one can analyze and determine whether they are getting a good deal or not.

The downside of STOs is that they demand many regulations, which makes them more costly. The regulation processes such as KYC, exchange approvals, and tracking ownership increases the cost. There are also limitations on the number of people who can invest in STOs, which may lock out some investors.

IEO stands for Initial Exchange Offering, and it is where a crypto exchange sells tokens on behalf of a crypto startup. The startup that wants its tokens sold has to pay the exchange a percentage to get a listing. The exchange sells the tokens and lists the coins after the IEO. Participants of the IEO are not obliged to contribute to smart contracts, as is the situation with ICOs. They are however obliged to have an account with the exchange company since they will have to fund their wallets to buy tokens in the IEO.

The advantage of IEOs is that the exchange will do the screening of the company before listing it and therefore, as an investor, you do not have the burden to do that. Since the token is listed after the IEO, it becomes easier to trade it with other currencies, unlike in the case of ICOs. Since the crowd sale is done on the exchange platform, it is easier to trust it.

A disadvantage of the IEO is that it is limiting since it is not on many platforms. There is also a high minimum requirement for most platforms.

While we talked about some more advanced methods, getting started doesn’t have to be difficult and you can get started today. You can start with a small investment and always increase it later on. By following this guide and using the methods we’ve talked about, you’re now well versed on how to make money with cryptocurrency If you do want further information or to speak to one of our team don’t hesitate to get in touch and we will support you ever step of the way.

Schedule A Call With US Today

If you’ve booked your session above, we look forward to speaking to you soon!