Why Boring And Bearish Could Be Just What Crypto Needs 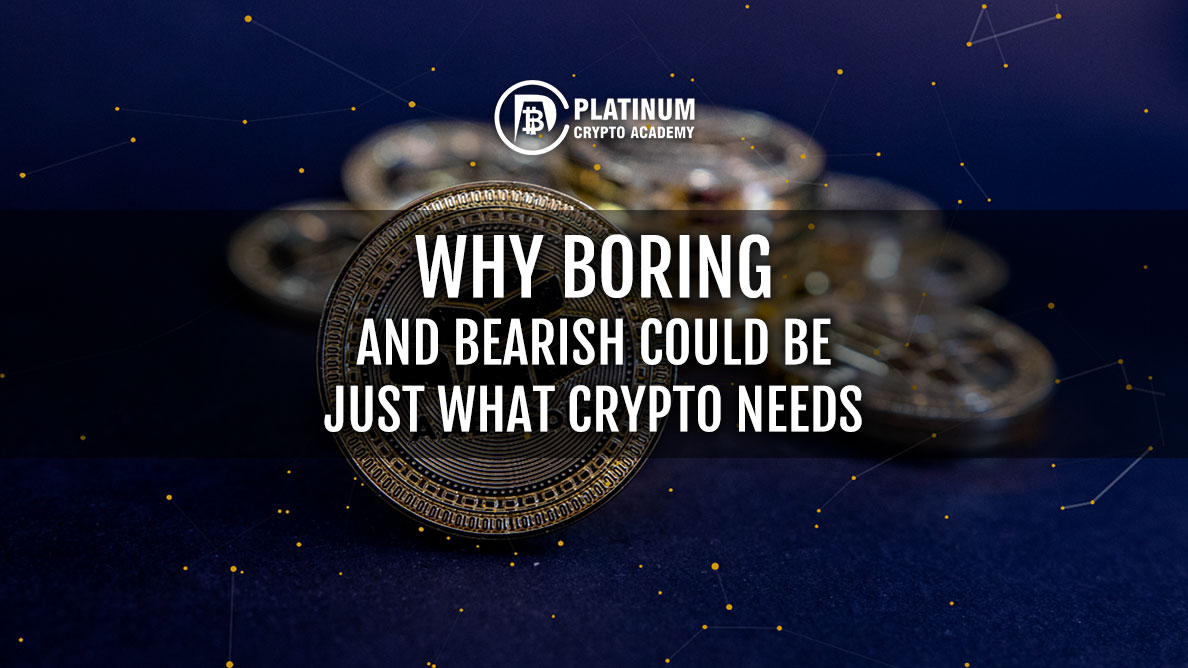 Why Boring And Bearish Could Be Just What Crypto Needs

Gold is still the hold

But isn’t crypto too volatile?

Back to those in the know

Just when we thought the world was getting back to something close to post-Covid normal, war broke out on the doorstep of mainland Europe.

The pandemic might now mostly be found in the inner pages of the daily news for those in the West, but chaos continues. Inflation is getting rapidly out of control in most major economies. And it’s getting to the point where it feels like everybody is shrugging their shoulders and asking: Ok, what’s next?

For those lucky enough to be able to focus on the simple things that make up everyday life in these times of turmoil, today is a time to take stock and prepare as best we can for a stable financial future regardless of what might come around the next corner.

Looking at your stock or crypto holdings will probably not offer much relief from the travails of the world right now, but it is here where we could find a silver lining. This is particularly true for those investors who understand that diversification is always a must, and who also have the foresight to see that the future will almost certainly be heavily influenced by what is rapidly becoming a fully matured crypto market.

Gold is still the hold

In the midst of mayhem, some things never change and one asset class always keeps its head. Gold is one of our oldest forms of currency, and after centuries of use, it remains a go-to hedge for those in the know, especially in times like these.

The good people at Asia Broadband, Inc. (OTCMKTS: AABB) certainly seem to be in the know as they have made gold and other precious metals their business for the best part of the last 20 years.

Asia Broadband is heavily involved in all aspects of the production, supply, and sale of gold. And they are now aggressively expanding operations in this sphere thanks to the recent and highly profitable $82 million sale of one of its mining operations in the Guerrero Gold Belt.

The thing that sets Asia Broadband apart from other companies, however, is that they understand that diversification is always as important as being in the right market to begin with.

A perfect example of diversification in action at its best is the way AABB used the significant income from the gold mine sale. Many companies would have counted their profits and basked in the glory of the sale for a while. Asia Broadband used its cash injection to branch out and embrace an upcoming asset class whose potential could rival gold.

The real beauty behind this move is that Asia Broadband is taking diversification to the next level. They are transitioning a significant part of their offering into the crypto space but doing so from the very real foundation of their gold holdings.

A lot of projects have emerged claiming to deliver gold-backed stable coins that act as crypto hedges, but very few of these are tied to real gold in the way that the AABB Gold Token is.

Without taking their eye off the burgeoning gold mining operations that are evolving daily, Asia Broadband is using the strength of its position in its traditional sphere to make a big splash into the space that is likely to dominate in future decades.

Asia Broadband’s CEO, Chris Torres, had this to say in an interview recently: “We are on point and thrilled with our production schedule beginning in early 2022, as we had planned from our new property acquisitions in 2021. The company is very focused on its mining operations growth initiative, which is our core business segment. At the same time, we are continuing to pursue further high-grade gold property acquisitions and production expansions to increase gold holdings and the circulation of our AABBG token.”

A successful company grounded in the stability offered by gold moving into the infamously volatile crypto arena may seem like a strange move, but things start to make a lot more sense when you look a little closer.

By launching a hybrid-crypto whose price is directly tied to gold that the company owns, Asia Broadband is doing something that others attempting to get into this sphere can’t come close to.

With their AABB Gold Token (AABBG), Asia Broadband is leveraging the historical stability of gold, wrapping it up in crypto, and placing this unique opportunity in the hands of its investors.

To support and drive up the rate of adoption of AABBG, the company has also recently released the AABB Wallet, and a proprietary digital exchange called AABB Exchange.

By doing so, AABB expects its token to become a worldwide standard of exchange that is stable, secured, and trusted with gold backing while having the added benefit of demand-based price appreciation. These are unique and outstanding qualities that simply don’t exist in other cryptocurrencies.

But isn’t crypto too volatile?

The truth is that crypto is a developing and relatively volatile asset class. The other side of this coin is that the crypto markets have recently started to mirror traditional markets.

The bearish crypto market mirroring the same sentiment in traditional markets may disappoint those who want crypto to become the digital equivalent of gold today, but it has significant implications in the long term.

It is also evident that institutional investors did not want much to do with the extreme volatility that has characterized the birth of Bitcoin and the crypto tokens that followed it.

If the crypto markets are beginning to react to the same macroeconomic events that impact the traditional stock markets, however, a definitive floor is most likely being set and the coming weeks and months will see large funds quietly scoop up the paper hands panic sales of retail investors who are now offloading Bitcoin at a discount.

Once the accumulation period is over, a huge surge in price should be expected in the second part of the year. At least this is what somebody as knowledgeable as Fidelity executive, Jurien Timmer, suggested with a recent tweet that charted the impact institutional money is likely to have on Bitcoin in the short to mid-term.

In his tweet, Timmer pointed out how boring Bitcoin at this point has a potentially massive upside in the long-term if the current bear market sees more institutional money pour in.

And as anybody with even a passing interest in the crypto markets knows, when BTC spikes the other coins automatically follow. Suddenly, it all seems to make sense why an already profitable and successful gold operation would want to move into the crypto market with such a unique offering.

Back to those in the know

With crypto entering a period of relative stability and gold doing what gold has always done, now it would seem perfect to combine the two.

This brings us back to Asia Broadband and the recent launch of its AABB Exchange which is home to over 400 cryptocurrencies and 60 trading pairs.

The new addition to the company’s crypto offerings will give AABBG token holders quick and easy access to liquidity and the ability to instantly exchange AABG for other cryptocurrencies such as Bitcoin, Ethereum, or Solana.

This once again pushes the envelope by empowering holders of AABBG with the ability to instantly switch between other cryptos as and when the market might suggest that this is the right move.

There is an old adage in financial circles that says a bear market is a perfect time to build. Huge swathes of red on the balance sheet may make for uncomfortable reading when checking the financial charts, but this is only ever really a problem for those who were over-leveraged in the first place. For everybody else, these days can instead become ones of endless opportunity.

Gold has proven its worth yet again in times of crisis, but a new level of maturity is taking hold in the crypto markets. By bringing together the two through a unique offering that is only growing in scope by the month, Asia Broadband delivers investment opportunities that combine the best of both worlds like never before.