Bitcoin Uptober – Could Bitcoin rally to $22,800 in October? 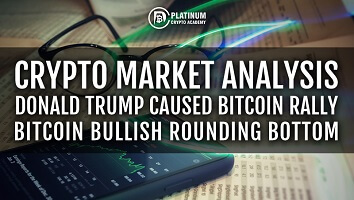 However, the second half of the year was a disappointment as the price continued to decline and lost over 50% from its top at $13,973.50.

Bitcoin started the new year on a weak note and looked to be losing ground. However, the news of the killing of Iran’s General Qasem Soleimani, in an airstrike ordered by the US President Donald Trump, caused a reversal in Bitcoin’s price. This shows that the market participants have again turned to cryptocurrencies in times of uncertainty and escalating geopolitical tensions.

The price of an asset class is determined by its fundamentals and the sentiment towards it. At times of panic or exuberance, fundamentals take a back seat and sentiment dictates the price action. Currently, the US-Iran tension has sent investors scurrying towards safety. This has seen a move away from stocks and into assets that are considered safe havens.

However, it is unlikely to be a one-way move. There will be periods of calm that would be followed by statements from both parties that would reignite the conflict. Accordingly, the volatility will remain high as the market participants interpret and digest the news and events.

If the tension cools down, the price might give up some of its recent gains as the bulls and the bears again battle it out for supremacy. At this juncture, the fundamentals of the asset class will play a major role in setting the next course of direction.

For the next few days, the short-term traders might get several opportunities to ride the small rallies. We believe that traders should book profits intermittently instead of waiting for a large windfall profit. Let’s study the charts of the top cryptocurrencies and determine the best possible course of action.

Bitcoin (BTC) has risen above both moving averages, which are on the verge of a bullish crossover. The RSI has also risen into the positive zone, which suggests that bulls have a slight advantage. The price can now move up to the overhead resistance at $7,856.76.

If the bulls can carry the price above $7,856.76, the momentum is likely to pick up and a rally to $10,360.89 is possible. As the risk to reward ratio is attractive, we suggest traders initiate long positions as suggested in our earlier analysis.

However, if the bears defend $7,856.76, the BTC/USD pair might remain range-bound for a few more days. A break below $7,000 will be the first sign that bears are back in action. The downtrend will resume below $6,435.

Ether (ETH) broke and closed (UTC time) above the resistance line of the symmetrical triangle on Jan. 5, which triggered our buy suggested in an earlier analysis. The price has reached the 50-day SMA, which might act as a minor resistance.

If the bulls push the price above the 50-day SMA, the ETH/USD pair is likely to rally to the $151.829 to $157.50 resistance zone. We anticipate the bears to mount a strong defense of this zone, hence, traders can book partial profits close to the zone. For now, the traders can keep the stop loss on the long position at $122.

Our bullish view will be invalidated if the price turns down from the current levels and plummets below $125.841. Such a move will increase the possibility of a retest of the recent lows at $117.090.

XRP has surged above the overhead resistance at $0.20041 and is attempting to scale above the 50-day SMA. The strength of the breakout from the tight $0.18339 to $0.20041 range suggests that the bulls have overpowered the bears.

There is a minor resistance at the 50-day SMA, above which a rally to $0.2326 is possible. The flattening 20-day EMA and the RSI in positive territory suggest that the bears are losing their grip.

However, as the price has risen sharply, we suggest traders wait for a dip towards the breakout level of $0.20041 or a minor consolidation to happen before initiating long positions. Hence, we withdraw the buy proposed in an earlier analysis.

Contrary to our assumption, if the bulls fail to sustain the price above $0.20041, the bears will once again attempt to sink the price below $0.18339.

After a minor consolidation for the past two days, Bitcoin Cash (BCH) has broken out of the overhead resistance at $227.01, which is a positive sign. The price is nearing the next resistance at $241.85. The traders can book partial profits at the current levels and trail the stops higher on the remaining long position to $215.

If the bulls can push the price above $241.85, the next target is a move to $306.78. The moving averages are on the verge of a bullish crossover and the RSI is in the positive territory, which suggests that the bulls are in command.

Our bullish view will be invalidated if the BCH/USD pair turns down from the current levels and break below the moving averages.

Litecoin (LTC) is attempting to break out of the 50-day SMA. If successful, it can move up to the overhead resistance at $50. The moving averages are on the verge of a bullish crossover and the RSI is in the positive zone, which suggests that bulls have the upper hand.

If the bulls can scale the price above $50, a move to $60 is possible. However, if the price turns down from $50, the LTC/USD pair might remain range-bound for a few more days.