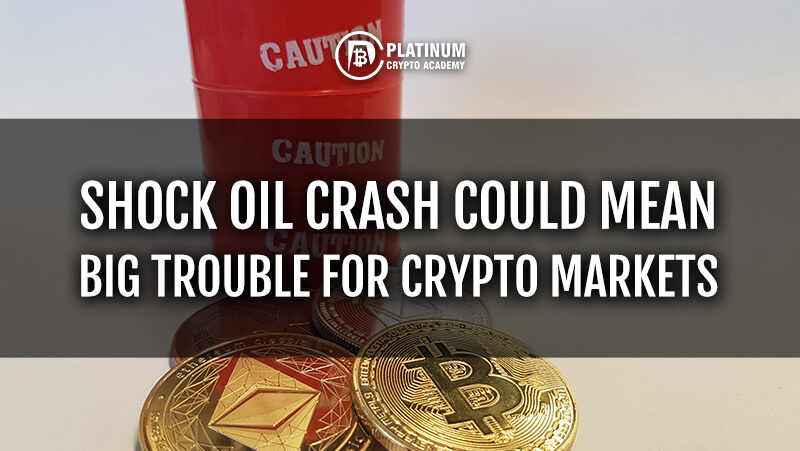 US crude oil futures dipped into the negative territory on April 20 for the first time in history. At its lowest, crude oil was trading at -$37.63 a barrel, which means the producers were forced to pay to dispose of the excess oil as they did not have space to store it.

In a single day, the price of crude plunged from a high of $18.44 to -37.63. However, the positive thing was that cryptocurrencies lived up to their billing as an uncorrelated asset as they hardly responded to the carnage in crude oil.

In the next few days, the crypto markets are likely to focus on the upcoming Bitcoin halving event. PlanB, the creator of the popular stock-to-flow Bitcoin price model believes that the model will be validated if the price surges about 10x in about 1-2 years after halving. Failure to do so will invalidate the pattern.

Unfazed by the current crisis, investors continue to pile up into Grayscale’s ten crypto funds. Grayscale reported a record inflow of $503.7 million in Q1 2020 out of which 88% of the investments were done by hedge funds. In its latest quarterly report, the company also said that it owned about 1.7% of the circulating supply of Bitcoin. This shows that institutional money is gradually entering the crypto space.

Arrano Capital, the blockchain arm of Venture Smart Asia, said that they have received regulatory approval to launch a new Bitcoin fund in Hong Kong. The venture capital firm aims to target $100 million under management in the first year and plans to launch a second fund dealing with a basket of tokens later in the year. The fundamentals are not projecting a clear trajectory for crypto prices. Let’s take the help of technical analysis to forecast the price action for the next few days.

Bitcoin dipped below the support of $6,526 on April 16 but the bears could not sustain the lower levels. This shows buying by the bulls on dips. The price quickly reversed direction and broke above the 50-day SMA.

This was the first close (UTC time) above the 50-day SMA since February 25. While this was positive, the bulls could not build up on it and carry the leading cryptocurrency above the overhead resistance of $7,466.

Both moving averages have flattened out and the RSI is just below the midpoint. This suggests that the BTC to USD pair might remain range-bound between $7,466 and $6,456 for a few more days.

Longer the time spent in consolidation, stronger will be the eventual breakout or breakdown from it. A breakout of $7,466 will be a positive sign and can result in a rally to $8,000 and then to $9,000.

The bears attempted to sink Ether below the critical support at $150 on April 16. However, the lower levels lead to aggressive buying by the bulls on April 16. This suggests that the sentiment is to buy the dips.

On April 18, the bulls pushed the price above the overhead resistance of $176.82 but the rally fizzled out at $191.22. This shows that the bears are active at higher levels and are unlikely to give up without a fight.

Currently, the price has dipped back below the support of $176.82. The upsloping 20-day EMA is likely to provide support. If the biggest altcoin bounces off this support, the bulls will make another attempt to carry it to $200 and then to $250.

However, if the bears sink the price below the 20-day EMA, a drop to the support line of the ascending channel is likely. A break below the channel and the support at $150 will be a huge negative.

XRP has been trading in a tight range of $0.17426-$0.20524 for the past few days. The 20-day EMA is flat and the RSI is just below the midpoint, which suggests a balance between the buyers and sellers.

If the price slips below $0.17426, the advantage will tilt in favour of the bears. Below the range, the decline can extend to $0.145 and below that to the recent lows.

The bulls are struggling to propel and sustain Bitcoin Cash above the 50-day SMA. This shows that the bears are active at higher levels. The 20-day EMA is flat but the RSI is in the negative zone, which suggests that bears have a slight advantage.

Our bearish view will be invalidated if the altcoin rebounds sharply from $200 and rises above $250. Such a move will indicate demand at lower levels. The BCH to USD pair is likely to pick up momentum above $250.

Though Bitcoin SV bounced off the support at $170 on April 16, the rally fizzled out at $192.67. This shows that bears are active at higher levels. Both moving averages are flat and the RSI is just below the midpoint, which suggests a balance between the buyers and sellers.

We spot a descending triangle pattern which will complete on a break and close (UTC time) below $170. The pattern target of this bearish setup is $118.