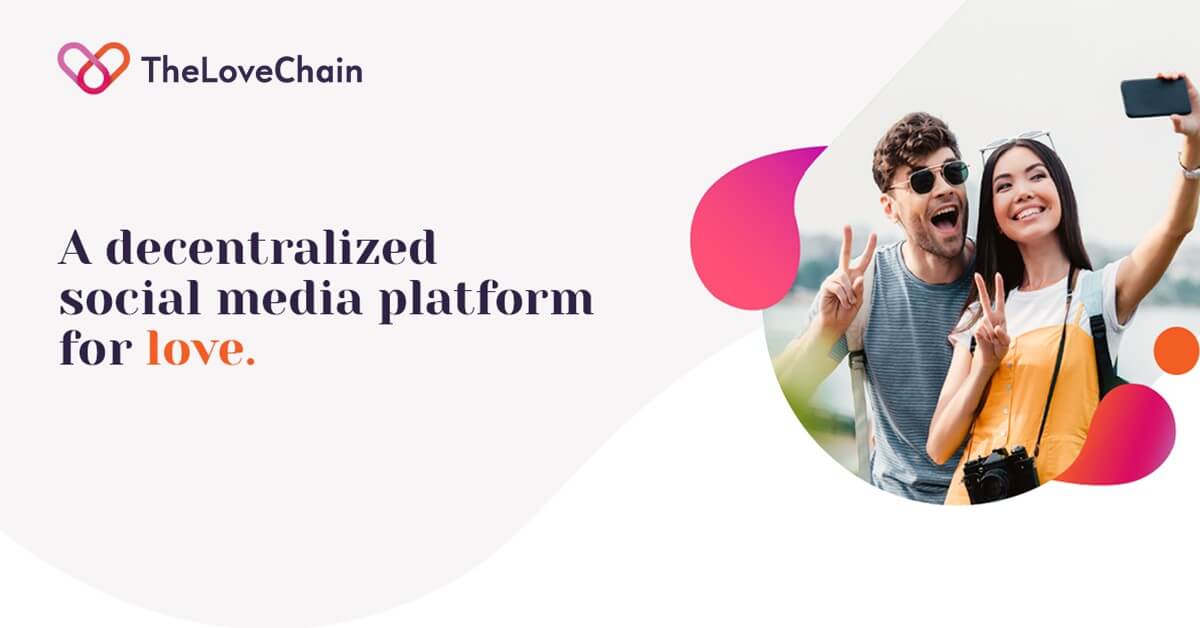 Technology has made the world a better place, connecting people from all around the world. Today, technological innovations such as social media have become a “basic need” with the average person using such platforms at least once a day.

According to Statist, in 2017, 81% of the US population had a social media account. The research predicted this number could grow to 3.02 billion monthly users by 2021. While the monthly global user base is expected to reach 3.02 billion by 2021.

The pairing of Blockchain and social media is a partnership that blends together their qualities for unique offerings such as that being done by the team at The LoveChain. The team have come up with a novel approach by applying Blockchain technologies immutability to disrupt the social media landscape. Based on the theme of love, The LoveChain (www.thelovechain.io) is one of the first to bring such technology and social media together.

THE LINK BETWEEN BLOCKCHAIN TECHNOLOGY AND SOCIAL MEDIA

Social media refers to the applications and websites that are designed to allow individuals to share content quickly. Generally, the ability to share in real-time photos, thoughts, and events have changed the way we live. When people think about social media, the first thing that comes to mind are the traditional names such as Facebook, Twitter, Instagram, LinkedIn, Pinterest. These traditional platforms have been revolutionary but also plagued with problems. Hence comes Blockchain!

The main disadvantages to traditional social media are data protection, the loss of personal privacy, and ownership of information. For instance, some content creators using social media have managed to create a name for themselves, however, the ‘centralized’ control model forces users to get little compensation for their efforts.

WILL A BLOCKCHAIN SOCIAL NETWORK EMERGE?

We believe so as the benefits between Blockchain and social media are of a natural fit and complement each other. The security aspect that the Blockchain offers can counter to the lack of data protection and privacy as evidenced in the case involving Cambridge Analytica and Facebook. This has resulted in. users now looking for alternative platforms that serve the same purpose. With each new day, more and more trends point to the decentralization of social media. Blockchain-based technology and decentralization is the future, especially for social media.

ARE BLOCKCHAIN-BASED SOCIAL NETWORKS THE NEXT BIG THING?

All the signs are pointed towards it. With Blockchain social media, a new form of social networking is emerging and rapidly expanding to provide better security, functionality and immutability. Blockchain-based social media are decentralized platforms that use the power blockchain technology.

Additionally, the development of applications whereby smart contracts powered by a

Moreover, some of the standard features include the use of a native currency for transactions, to reward users like The LoveChain has along with crowdfunding initiatives.

Blockchains such as the Steem blockchain have already entered the social media industry and are helping many users to share real-time photos, events and opinions.

IS BLOCKCHAIN THE FUTURE OF SOCIAL MEDIA?

Many seem to agree that traditional social media have served their purpose. It may be time for a change, and the emerging decentralized social media promise a much better way of operations by giving its users greater control over what happens to their data.

SHOULD SOCIAL MEDIA USE BLOCKCHAIN, AND IF SO, HOW?

As stated above, Blockchain technology offers new perspectives for social networking. Platforms that have already integrated this technology serve a perfect example of the importance of Blockchain in this ecosystem.  Blockchain can be used in various ways. These include:

In traditional social media landscape, each time a user uploads any content even on private messages, those in charge of moderating these platforms have access to this data. However, Blockchain decentralized nature ensures users have data security and protection. Blockchain will also allow the users to freely express their options on some issues without having a fear of their accounts being suspension.

Today’s world sees data as a high-priced commodity, and its exploitation amongst the various centralized platforms is all too common. Targeted advertisement and pop up adds of the products you browsed online are among the many examples of how centralized social media uses the information they have on their users. In 2017, one of the social media giants brought in USD$9.32 billion in advertising revenue and kept it to themselves.

Although some individuals applaud the technique from a marketing perspective, it has grave implications for the unwitting user at the receiving end. Simply put, the user is being commoditized, or turned into a product and taken advantage of.

Blockchain-based social media have end-to-end encryption and lack intermediaries. This eliminates threats such as user commoditization. Conversely, users have the power to restrict and or release data  as and when they see fit and for the right reward.

Importantly, this is ensured by the use of Private and Public keys. By using the private key, a user can initiate a transaction, details of which is stored in a data block which is only added to the chain after verification by a majority consensus of other members on the network. Notably, the data is accessible only to the intended recipient.

For content creators, blockchain social media would be quite lucrative since they have control of their tokens.  Each time a user posts content, they get rewards using native coins. A content creator can get money directly from users who like their work. This can be done through user-to-user financial transfers.

THE LOVECHAIN COULD BE THE ANSWER?

One setback that has caused many to rethink the move to blockchain platforms is the notion that these platforms are complicated and are not as user friendly as the traditional platform. The answer to these problems is creating a platform that not only used Blockchain but also ensuring the user gets a simple and best experience similar to the traditional platform.  This is what The LoveChain  aims to do.

An Australian team of entrepreneurs based in Sydney were inspired to create such an offering. Their Inspiration was the love locks found on bridges across the globe, hence The LoveChain was created. This team is in the process of launching their first initial exchange offering (IEO) on 4 May 2020 with ProBit.

The LoveChain is a social media application with an e-commerce marketplace that harnesses blockchain technology. The platform brings together the changing technologies allowing users to record, share and celebrates the people and things they love. Additionally, The LoveChain allows users to capture critical moments in their lives such as marriage records or a permanent store of one’s wedding vows.

Additionally, each profile on the platform is allocated a cryptographically generated code number and used to symbolize the unique relations being represented.

The LoveChain also allows users to create or join sub-groups around themes they create. The platform uses its native coin, the LOV token for transactions within the platform.

In addition to the LOV token, a  user can collect LOVR reward tokens by either, posting content, gaining followers, sharing a post, sharing data with advertisers or obtaining likes. Unlike many social media platforms in the blockchain ecosystem, The LoveChain platform is already generating income through its e-commerce marketplace.

The platform is simple to use. All one needs is to sign up with a valid email address. In this process, the platform will need to verify the users’ details before the digital estate can be created. Once a user passes the verification process, they begin creating memories of the things they love.

THE LOVECHAIN AFFILIATES AND WHY IS THIS IMPORTANT

The platform has an e-commerce market place with merchants and affiliates who provide goods and services that complement a memory or event a user might be celebrating. This has been a game-changer for the platform and the user. Users no longer have to go through the stress of thinking about gifts, party items for an anniversary, date night birthdays and so forth.

Overall many social media users are not aware of how the current centralized systems may jeopardize their privacy and earnings. Blockchain social media platforms such as The LoveChain will help protect such user in the days to come as more people realize the dangers they face from traditional platforms. The introduction of The LoveChain has ensured better experience with guaranteed rewards for users.