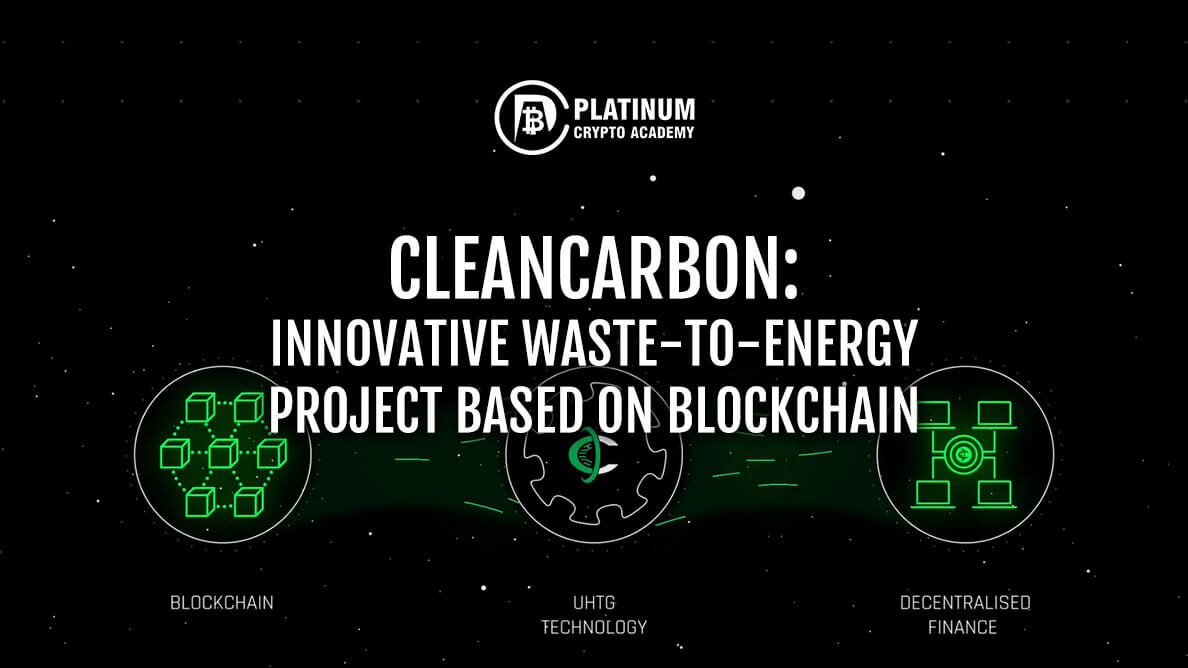 Benefits of UHTG technology and Syngas

CleanCarbon is the first asset-backed community-driven blockchain project that aims to sustainably clean our planet Earth. It combines the benefits of decentralised finance (DeFi) with the physical waste-to-energy installations.

In fact, the CleanCarbon project was born to address the fundamental issues which governments as well as companies encounter when tackling pollution and restoring energy from waste products. The mission of the project is to stay in the market and grow in the next 5, 10 or 20 years or even more.

It will implement new ideas into old business models, spark innovation and speed up the transition towards a greener planet which we all aspire to live on. The CleanCarbon solution connects two worlds – the new model of DeFi financial incentives with physical installations of the next generation waste-to-energy systems.

It is the first initiative that uses DeFi as a driving vehicle to accomplish environmental goals faster and more effectively. CleanCarbon has already begun building a next-generation waste-to-energy installation, starting with a R&D facility and the pilot project in Canary Islands, Spain.

The building blocks of the CleanCarbon project are the physical waste-to-energy ultra-high temperature gasification (UHTG) installation, a patented technology recently developed in Europe.

Benefits of UHTG technology and Syngas

The CleanCarbon system treats almost any type of waste, as long as it contains some organic products and the right amount of moisture. The UHTG technology is low cost but is a more efficient and sophisticated standard of waste treatment and energy recovery.

In comparison to other competing technologies such as Pyrolysis or Plasma, the UHTG technology is much more beneficial because it offers full carbon conversion as compared to partial carbon destruction with other technologies.

Overall, decentralised UHTG technology can provide green hydrogen in relatively large quantities for various industries at competitive prices. The energy consumption of the UHTG system can be covered after separation of the hydrogen from the energy content of the remaining gases.

With the UHTG technology, the buffering of excess energy can be used to make the balancing power available when needed. The UHTG technology significantly reduces disposal costs and allows running long-term operations.

CleanCarbon has already partnered with local and international companies to fully utilize their syngas and other by-products from the UHTG process.

Syngas contains about half the energy value of natural gas and consists mainly of hydrogen, carbon monoxide, methane and a minimum amount of carbon dioxide. It is a valuable, pure and ready-to-use product with a high hydrogen content that can be used in many ways. The primary use of syngas will include hydrogen production and distribution, power generation from the excess heat, lactic acid drying, sale of the process by-products and more.

CleanCarbon will produce clean syngas containing between 40-75% hydrogen, depending on the type of waste available at any given time. The hydrogen will be easily separated from the synthesis gas and almost 100% used by the company as a product and in various downstream processes.

The CleanCarbon team feels that having a smaller T6 unit is essential because it will allow the company to determine how to treat various waste products, as they all require different moisture content and slight changes in the UHTG setup.

Cleancarbon: Accelerate The Reduction Of The Carbon Footprint From The Environment!

The pilot project of CleanCarbon will be installed in Fuerteventura, one of the Canary Islands in Spain. Both the founders of the CleanCarbon project as well as some of the team members have been living in Fuerteventura for many years. That helped them notice the problem and come up with a modern and effective solution.

Fuerteventura is one of the best-known Spanish islands, famous for its all-year-round sunny weather and very strong winds. These weather conditions are ideal to power the project installation in a very cost-effective way, using solar panels and wind turbines.

Besides, Fuerteventura is a part of the European Union (EU) and, as a result, benefits from Europe’s push towards using more renewable energies. The CleanCarbon project is also getting ample support from the local government and is working with local partners who are well-connected with multiple branches of Fuerteventura’s government.

However, a backup plan to power everything by the power grid is also being considered and may be used only as a temporary solution. The final decision on the exact source of energy to be used for operation, will hinge on the final budget of the project team.

The revenue model of the CleanCarbon project will comprise multiple revenue streams, including production and use of hydrogen, waste disposal, black carbon production, lactic acid and hydrogen car rental, among others.

The production and use of hydrogen will be one of the largest revenue streams. The project will produce hydrogen-rich syngas, which will be sold via pipelines to nearby gas stations to power hydrogen cars and other future utilities.

The second-largest revenue stream will be waste disposal. The local government and many local companies will be paying CleanCarbon to utilize most of their unwanted waste products. The T25 unit will most likely be placed in the Zurita landfill itself or as close to it as possible, in order to significantly reduce the project’s operating costs.

UHTG installations also produce black carbon as a by-product of their operations. It is a pure molecular carbon widely used in the photovoltaic industries as a layer of coating for solar panel cells. CleanCarbon will be selling and shipping those black carbon to generate an additional source of revenue.

Incidentally, the island of Fuerteventura is famous for the local production of goat cheese, which is also the second largest revenue earner for the local economy of the island, after tourism. However, during the manufacturing process, large quantities of lactic acid are being produced, which is toxic to the environment. The scale of the issue is so big or serious that the local government recently imposed fines on some of the largest goat cheese producers for disposing lactic acid into the ground.

CleanCarbon plans to collect the lactic acid and use it as a moisturizing agent, necessary for the UHTG process and also charge a disposal fee from the farmers.

Apart from the above potential sources of revenue, CleanCarbon also plans to carve out an additional line of business and source of revenue, which will take advantage of the island’s huge tourist inflows and its own output of hydrogen. Fuerteventura is one of the best-known holiday destinations in Europe with over a million tourists visiting the island every year. The latter figure is over five times the number of its local population.

Having large quantities of hydrogen on demand, CleanCarbon is in talks with car makers such as Toyota to import a fleet of hydrogen cars and start a premium car rental company and provide the necessary fuel for the rented vehicles.

CleanCarbon expects the pilot project to be operational in less than a year. Once that is done and the business model is tested, the company will begin its expansion plans, which should be quicker to build due to its growing experience and specific domain knowledge in the field of UHTG systems.

Once the installations in the three largest Canary Islands are completed, the company will look for real global expansion. The business model of CleanCarbon involves global partnerships and commission-based franchise models to accelerate its global growth.

The CleanCarbon business model is an example of how modern technologies such as blockchain and DeFi can be used to solve some of the world’s most pressing problems and, that too, in a profitable and sustainable way.

The patented UHTG processes is emission-free in processing waste, has low noise and offers maximum flexibility in the input and output applications. As of now, it is quite rare to come across a project the explores the wider utilities of blockchain technologies while cleaning our planet but we hope this is the beginning of many such projects in future.