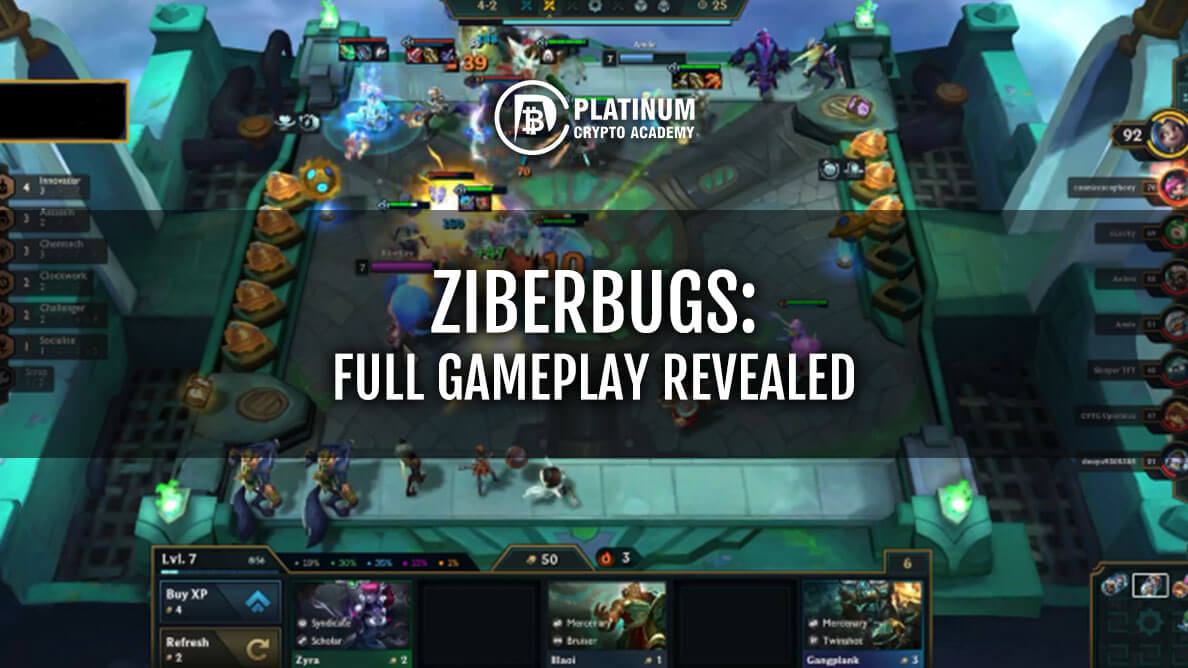 How does it work?

Unique Aspects of the Gameplay

How will the gameplay evolve?

ZiberBugs is a competitive autobattler created for gamers with the aspiration to greatly increase the number of professional gamers in the world. The game seeks to attain the perfect balance between people wanting to pay for entertainment and people wanting to contribute to the ecosystem while getting rewarded for it. It also strives to expand on successful aspects of other NFT games while, at the same time, repairing some of the design flaws that exist within them.

There are many elements and features within the ZiberBugs ecosystem that makes it stand out from the rest of the NFT games currently available in the market. The NFT gaming industry is relatively new and it is quite obvious that crypto games require an element of fun to remain sustainable in the long run.

ZiberBugs is developed with the fun-first principle in mind, thus intended to maintain value and playability without financial incentives. As with many other games, this too has both PvE and PvP elements within it. The PvE elements focus more on the gatherer mentality and puzzler while the PvP part is aimed towards the competitor personality.

While other games focus on revealing graphics and teasers, ZiberBugs has announced the first version of its full gameplay, so that the community gets a full impression early on. The team believes that games – competitive ones in particular – are mainly about fun, and the visuals are secondary.

The concept too is new – a never-before-seen hybrid between nature, fantasy, and sci-fi. The cruel darkness and dim lighting combined with mesmerising neon coloured creatures aim to project appealing emotions to their most important target group – the gamers. It is native to their visual concept – the eternal dark mode.

The ZiberBugs project has evolved with the community and so, there will be one or many streamed events called Community Contribution Events, where the community will be invited to help evolve the game by suggesting names, abilities and game features. The suggestions, which the ZiberBugs team decides to keep, will be heavily rewarded.

How does it work?

ZiberBugs is a play-to-earn NFT autobattler on the Cardano blockchain and is made for the competitive players with fun as the top priority. Inside the game, your opponents will appear the moment you enter the battlefield. You have to browse through the enemy bugs to learn everything you need to know about their abilities and stats.

Once you have passed the above stages, it is time for your first action. Genetic boosters will be presented to you and you have to pick one out of four pairs to gain a power-up for two of your bugs. It is better to avoid boosters for bugs you don’t have.

The next step is to position one of your bugs anywhere on the battlefield. Once you have done that, your enemy will place their bugs and you have to take turns to place two each until all bugs are placed. You have to be mindful of your enemy’s positioning, utilize likelihood patterns, ability knowledge and creativity to gain an advantage.

The real fight begins at this stage. Bugs use passive abilities and “Ultimates” in combat, charged up when dealing damage. There are several possible abilities per bug, defined by its genes. Smart positioning, utilization of stacking power-ups and synergising line-ups will determine the outcome of the battle.

Before you proceed for the next and all subsequent rounds, you have to choose another genetic booster. There are 27 different genetic boosters, three for each bug. Throughout the match, you gain experience that grants you promotions, which will boost a bug’s stats significantly. However, you have to choose your promotions wisely. Boosters, synergies and power-ups can cause various options for optimal performance.

As the second round begins, you have to keep doing your best to build your power and defeat your enemy in the best of nine rounds. The match is over when a player has won five rounds.

Unique Aspects of the Gameplay

The PvP arena is inspired from many other auto battlers, with a few differences. Users will go to battle with a professional team of 6 bugs, which they acquire from the marketplace. They battle against one other opponent over several rounds.

The game is fully turn-based, and player action takes place between rounds, where they take turns in positioning their bugs, distribute promotions and more. Highly influenced by boardgames, there are no player sides in ZiberBugs – users can place their bugs anywhere on the court. Many tactical elements will occupy the battleground, and it is each player’s task to outsmart the opponent with strategic outplays and tactical predictions.

Each of the nine bugs will come with set base stats. On top of that, four genes called A, S, M and Z are inherited when bred, which gives bonus stats. One other gene named P1 provides a passive ability and one final gene by the name of P2 gives an Ultimate ability.

When players reach a certain account level, the Ranked Arena will be enabled. Players will be matched against other players with similar rank and they gain points if they win. The wins will also result in earning the game’s in-game currency. The higher the rank, the more you earn from winning. Prior to reaching maximum level, users can still play practice games against players of similar level.

The ranked play will be divided into seasons, after which there will be prizes given out to the best players and a soft reset to the player rankings. The prizes will be given out in ZIBER – ZiberBugs’ own governance token.

The ZiberBugs team’s goal is to grow ZiberBugs in popularity and create a willingness to become the best and play among professionals. The company is prepared to help the cause by coordinating and arranging tournaments with grand prizes. Those will be streamed on all social media platforms with professional casters, and it will be easily accessible from inside the game.

The in-game currency of ZiberBugs is called $Pheromones and users can earn it by playing and winning PvP games. The higher rank you are, the more you win per game. Upon launch of the Breeding system, a big DEX swap pool will be created on the leading DEX, where anyone can obtain $PHERO. A large amount of $PHERO will be minted for this purpose. Aside from that, $PHERO will only be minted when won, and burned when used for Breeding.

However, all $PHERO spent by the players as breeding fees and other fees will be immediately burned. Hence, it is not part of the income distribution model.

While other auto battlers require the user to do work while the battle takes place, such as scouting and likelihood estimation, ZiberBugs allows the user to sit back, relax and enjoy the fight, as there are no other things to worry about.

How will the gameplay evolve?

Just like many other auto battlers, ZiberBugs will have major upgrades between ranked seasons. These upgrades include switching out many or all of the old abilities, adding more new abilities per bug and changing powerups and boosters to new and exciting things.

More community events will come for this purpose. ZiberBugs will also have a progression system that aspires to not only be engaging for the players but also work as an anti-cheating mechanic.

It aims to capitalize on the most successful aspects of other games that have already been shown to function. Breeding is one such aspect, which allows entrepreneurial players to profit from supplying and evolving resources to the player base.

For this element to work, there needs to be an entry cost to the game that can vary based on each player’s requirements. Apart from professional gamers, ZiberBugs also aims to attract crypto investors who would contribute to the ecosystem and get rewarded for that.

The project scope and future beyond Beta launch varies vastly based on the success of the development phase and the launch. Growth is the main priority of the project, its founders and its future.

The end goal is to be able to tie everything together into a gigantic decentralized metaverse of its own, governed by the ZIBER token. The ZIBER token will act as a fundament for the financial infrastructure of all of it, and the Ziberverse Fund allocation in the tokenomics will be used to fund the initiative.

The Ziberverse Fund will be the development fund and will be used for any future scaling of the business, project or any idea that expands on the Ziberverse. It may also be used for reserve allocation for other purposes.

What is interesting is the ZiberBugs team is already conscious that the growth will stagnate sometime in the future and that the amount of money flowing into the game will decline once the current hype is over.

By that time, the team will have most likely expanded into other opportunities such as expansion and additional games, as well as adjust the income distribution. The clairvoyance shown above is expected to keep the financial ecosystem stable long after the growth has ended.